Ischia . The island. The sea. The sun. Wild nature. The seagulls … Choosing the island of Ischia as the place to celebrate your union of love is something that comes by itself … Just hear the stories, look at a photo or simply have an idea of where God placed it.
Yes, because it was placed right there, in beautiful Italy and precisely in the Gulf of Sirens, where the legendary Partenope reigned, where there is always the sun, where the sea inspires the most beautiful songs of all time and poets to become travellers of infinite spaces… There, where music plays the notes of love, eternity, oblivion.
Yes, because Ischia is the island of love … it is the gay reflection of a land steeped in sentimentality and passion … And it is there, in the Neapolitan sea, caressed by the waves of the most romantic archipelago in the world and lulled by the warm winds of the South.

Yes, because Ischia is the island of love … it is the gay reflection of a land steeped in sentimentality and passion … And it is there, in the Neapolitan sea, caressed by the waves of the most romantic archipelago in the world and lulled by the warm winds of the South.
The uniqueness of the beautiful Ischia is due to its land largely of volcanic origin; for this reason, especially near the ancient craters, thousands of spontaneous flowers are born here and in spring, the hills are covered with gorse: you recognize their wild and caressing smell as soon as you approach our ports, travelling on the sea in June.
It is a flowery island, a botanical kingdom where the green plants of the Mediterranean scrub grow, fragrant and luxuriant, which in spring explode in a multiplicity of incredible colours and shades and Ischia thus becomes a carpet adorned with dog rose, myrtle, tree heather, wild orchids, capers, hawthorn and much more.
This is a perfect microcosm where sea, earth and thermalism are combined in perfect harmony and where the cosmogonic elements of water, earth, fire and air give rise to land that becomes an ancestral idyll. 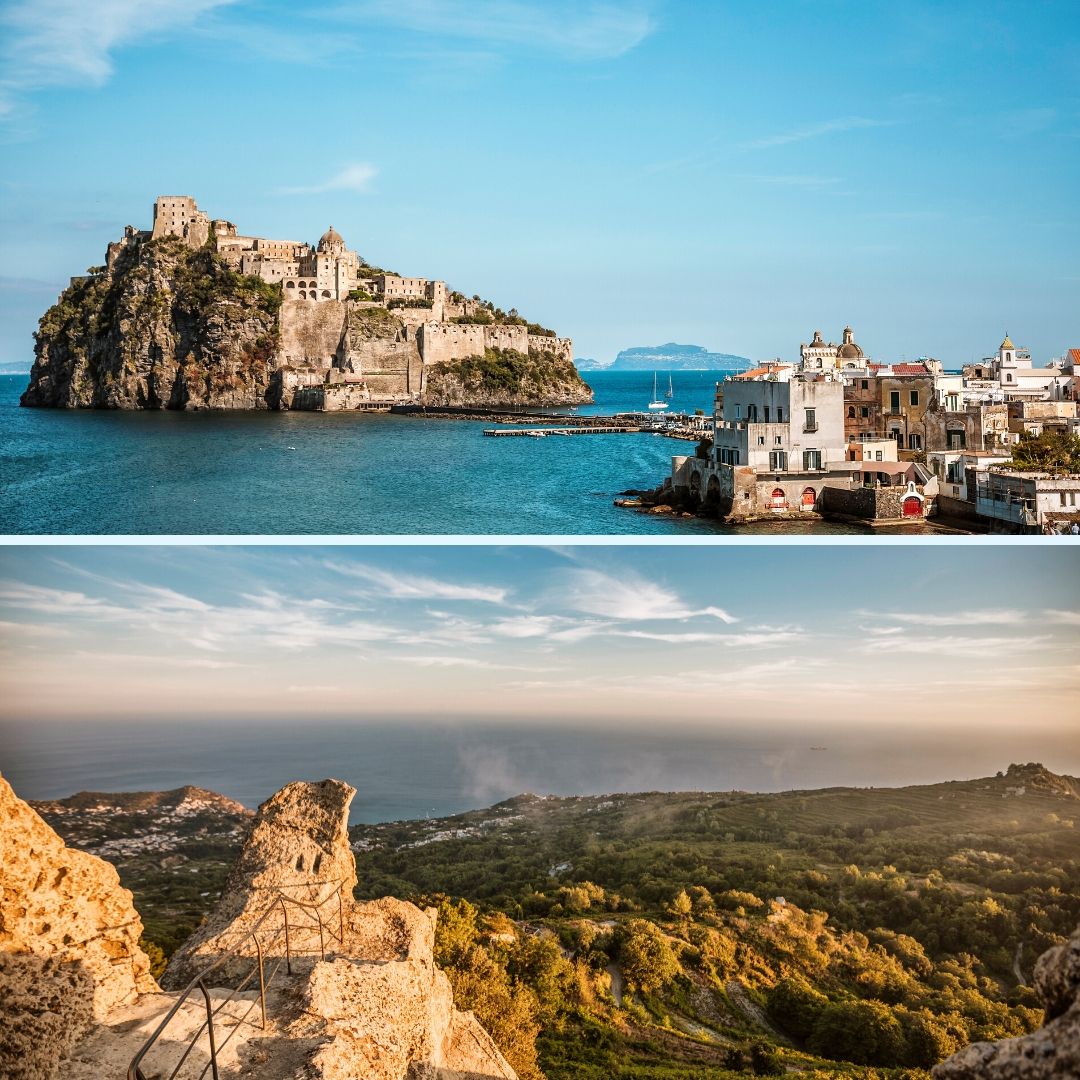 Ischia, the original Pithecusa, is the green island for the color of its tuff, emerald green like the stormy sea, testifying to the fact that it was once buried in the bowels of the sea which, therefore, colored the rock and only its volcanic nature and the intense activity of the fiery magma allowed its rise, giving it to its inhabitants and to those who decide to land there.
Ischia is then the island of Tifeo, the giant punished by Zeus and condemned to support it forever on his shoulders, giving rise, together with Procida and Vivara, to the Campi Flegrei complex which means fields of fire: “the burning earth”, as the ancient Greeks said, a place still cloaked in mysteries: wild and gloomy scenery, “a cave, to paraphrase Virgil, bristling with rocks, dark, surrounded by black lakes and perhaps inhabited by the devil who had as a symbol and element to him referable to sulfur, from the Latin sulfur, “Burning stone”, an alchemical figure par excellence and present in high quantities in the Solfatara area; a place where the ancients imagined the Sibyl and where legend has it that here there was an entrance to hell, from which Christ descended to free the souls of the righteous.

Getting married in Ischia is a dream.

Choosing it, among the many places in the world, means choosing the memory of a place that will forever remain the frame of what is, you know, the best day in the life for all lovers and it is not just this … as there is much else.

The island is a beautiful place to get married in South of Italy
You wanted a wedding by the sea; You wanted an exclusive wedding in a breathtaking resort; Have you wanted an outdoor wedding in an immense garden or in a wine estate? The island of Ischia can fulfil these wishes and others.

We are waiting for you …

Locations where to get married
Go to Top